Mary Trunk is a Film Maker with a history of creativity that also includes Visual Art & Dance. Mary has just finished her feature length documentary film called, Lost In Living, whichexplores the lives of 4 mother artists over a seven-year period.
As a budding film maker and social researcher myself Mary’s work is really exciting. As we all know, the soundtrack, visual & physical coherence of our lives is irrevocably changed when we become parents. Film is a great way to explore & perhaps more importantly show this, in its noisy, often chaotic reality, to each other and the wider world. To see the creativity in everyday life, as Mary discovered, and to find our own way of embracing that.

Here Mary tells us about her own journey into the life of mother artist and the genisis and realisation of Lost in Living. 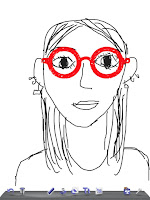 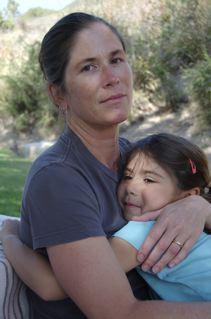 Two weeks after my mother died from a sudden heart attack I managed to get pregnant with my daughter, Nuala, and gave birth at age 40. I was never so happy and so sad at the same time. My daughter, Nuala, is now 10. She is the utter delight of my life.The baby and toddler years were relentless, often excruciatingly boring and mindless but oddly I managed to be more productive than I thought I would. I was so afraid I would give up everything for the baby and never be creative again, not realizing that I had cultivated and nourished my creative self for forty years and that wasn’t about to disappear quickly.
What did change was that my daughter became the priority in every way. When I was much younger, success and recognition and ego were more wrapped up in the creative work than they are now.  Creativity for it’s own sake, the act of expression and just putting the time in (when you can get it) have a value that defies outcome, product and “making it.”  Frankly, it’s a relief when I can be in that place while I’m working.  And the work seems deeper and more complex. Lost in Living
We moved from San Francisco to Los Angeles when our daughter was one and a half. My husband worked long hours and I spent my days caring for Nuala, trying to finish a film and attempting to keep up on the domestic chores that were quickly getting out of control.  I joined mommy groups and play groups, met some other parents, commiserated about baby stuff and still felt lonely and isolated.  I was drowning and needed a life raft.  So I turned my video camera on myself.  I videotaped ten minutes of my day, every day.  Sometimes it was ten minutes of my daughter sleeping, other times it was me folding laundry, one time I was giving my screaming daughter a much needed antibiotic and another time it was my husband and I arguing.  All moments that can occur in every person’s life.  I did this faithfully for an entire year, every single day.  Somehow by sticking to this routine it occurred to me that I was finding meaning and drama in the ordinariness of my life.  I was redefining the mundane world of caring for a baby, managing a house and seeing it as art.  Not only did this help me to finish my film, it sparked the idea for my newest film, Lost In Living.How were other mothers defining and shaping their lives as parents and as artists?
Women don’t diminish as artists when they beome mothers.  On the contrary, they see motherhood as nurturing the artist within and their art life nourishes them as mothers.  Both identities can seem like a burden or a state of grace and both are necessary to understand and feel compassion for others.

Having the opportunity to discuss our lives as mothers and artists with other women who straddle those same identities gives me the courage and inspiration to keep working and continue to find value in that work.
Bravery is…exposing your vulnerability
Imagination is…using your weaknesses as a source of inspiration
Generosity is…allowing others to be who they are
See Mary’s blog for more on her projects, experiences and the stories of others.
The Mother Artist Network (MAN) is an initiative of Jo Pollitt and Lilly Blue and BIG Kids Magazine. This inaugural mini MAN Festival has been curated in collaboration with guest editor and mother artist extraordinaire Vivienne Rogis to whom we are so grateful!
The Mother Artist Network is a place that invites BIG ideas and discussion about creative practice and motherhood. Through a forum of ongoing blog posts the MAN will feature voices of mother-artists at all stages of artistic engagement and motherhood.  We very much hope you will contribute to the conversation by commenting below or emailing us at [email protected] to add your story to the mix.